During the last few months, I have continued to study intensively. We had three modules to complete during that time, as well as some exams and submissions. Furthermore, the main part of the compulsory subjects, i.e. the subjects that are required and in which you are not allowed to fail, have been passed. Hooray!

In my last article, I gave a summary of the second residency and some additional information regarding the third residency. This is where I would like to start and give you further insights.

What happened in between? 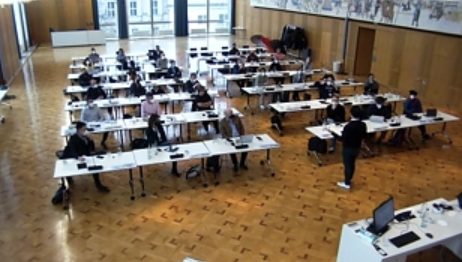 For the most part, the university blocks took place at approximately two-month intervals. It was still a matter of preparing during this time and thus making one’s own contribution to the teaching during the sessions. In the third residency, we had only completed the Business Strategy subject. Corporate Strategy was added in the fourth residency. In this subject, as in most, the focus was on learning with case studies. This helps especially to give the theory a real context. The case studies introduce various industries, which also helps me gain broader knowledge, thus acquire knowledge outside my own industry.

So far, we have had the opportunity to participate in an after school event at each residence. In the fourth module, we went boating together. And no, this time they didn’t ask me to take the wheel. It was a much larger boat than I had been allowed to drive in Residency 1. The trip also included an evening buffet. Even the weather cooperated very well. So, we were able to enjoy a glass of wine, beer or even water and chat comfortably with the others.

Before our fourth residency, we were given a choice of diverse course options for the fifth residency, which is GNAM. We were to select three courses with a ranking and submit them in advance. Afterwards, depending on the popularity and number of places, it was decided which course of the three favorites would be taken. Any courses are offered by various partner schools. Enclosed, I also link the current courses.

I was selected for the course “CRISIS & ISSUES LEADERSHIP” at the Australian Graduate School of Management. The reason why I was interested in this subject is because every company can get into a crisis, and the action to be taken in such a situation must be well-thought-out. Before the course I would probably have panicked, but now I have enough tools to be able to develop a structure in the approach in such a situation and thus hopefully manage the crisis successfully. But let’s start from the beginning. What are crises in general? Of course, one can think directly of wars, natural disasters or similar. But the concept of a crisis is much broader. Be it the supply chain is not working, and the main product is not possible to produce. Or, be it a factory worker has a serious accident or similar situations can be good examples of corporate crises. In this regard, the course met my expectations, and I was able to gain a lot of knowledge from approach, leadership skills to crisis communication with the press, relatives or even management board. Only to mention some of the knowledge I gained.

The course did not take place over six days as usual, but was held for only five days. Each day was split into preparation time and live course itself. At this point, I must also say that the course times and the amount of preparation can differ from course to course. Depending on which course you have enrolled in, it may be possible to take only half a day off. Personally, I was surprised because the amount to prepare clearly deviated from the usual residences. But since I had to additionally prepare for a SNOC’s course anyway, I could use the time effectively. However, more about that in further articles. The class at the GNAM course was well mixed with students from several universities worldwide. Isn’t it great that you can sit in a class together with students from Japan, America, South Korea and many more? The course started every day at 22:00 Sydney time, which also shows a flexibility of the University, furthermore from the Professor.

It should also be mentioned that this module usually takes place on site at the respective university. Since it was still uncertain how the Covid crisis would develop, it took place remotely. As a class, we found the situation very unfortunate, since we had set ourselves up for three remote modules. After we passed on the feedback, an alternative was actively sought. As an exception, we now have the opportunity to participate in an additional, voluntary module. This will take place in Lisbon. This showed me once again how much the university pays attention to feedback and tries to find a satisfying solution for those involved. Above all, I found the flexibility excellent. Initially, Moscow was the destination plan, but because of the current circumstances, an alternative was found in a timely manner. But I will tell you more about this module later on. Of course, I have registered for it.

I would like to dedicate the last paragraph to my group. Last week we had our last Meitner group assignment and were supposed to analyze a challenge in digital transformation in the subject Organisational Behaviour. The group constellation now ends with the fifth residency. Currently, with eight electives, divided into four groups each, we can choose one at a time. Depending on the elective, one is then assigned to new groups.

I almost get sentimental at the thought. We went through ups and downs within the meetings and still delivered everything on time. We mastered all tasks together, such as setting up the hypotheses for the foundation of our own company, the analysis of any case studies, such as the valuation of a company, or even a marketing analysis with a plan, to name just a few. It’s good that there are other modules where we can see each other and exchange thoughts. But to conclude here, I really liked the group work and I thought the constellation of the team was spectacular.

© 2023 Bright broad view of the world. Created for free using WordPress and Colibri